It may sound counter-intuitive, and certainly fairly unattractive when the weather is cold and wet, but January or February is the right time of year to carry out a bit of winter pruning of your fruit bushes, redcurrant and blackcurrant bushes, as well as gooseberries benefit from winter fruit bush pruning. Pruning now while the bushes are dormant means that they won’t leak sap and risk becoming diseased. And it gets them in good shape for flowering and making fruit too. 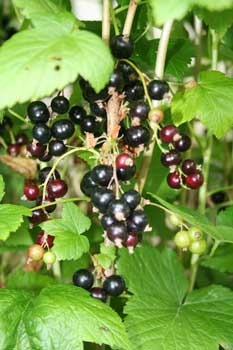 Blackcurrants flower and make fruit on last year’s shoots, so regular pruning is necessary to keep the yields up. You want to encourage as many young shoots as possible from the base. Cut down to a height of about 2.5cm all shoots which are more than two years old, and about one quarter to one third of two year old wood. You can tell which shoots are which by the colour: new shoots are a pale brown, two year old wood is grey, and older wood is black.

Redcurrants and white-currants are generally grown as an open-centred bush. This makes it easier to pick fruit, and also keeps the bush healthy. For an established bush, tip prune main branches, and cut back side shoots to an outward-facing bud. If you are growing your currants in cordons, then tip prune the main shoot, and cut back side shoots to one or two buds to encourage growth.

Gooseberry bushes should also be grown as an open-centred bush, like redcurrants. There are two ways to prune gooseberries, known as ‘regulated’ and ‘spur’ pruning. Regulated pruning involves cutting out all the old wood to prevent overcrowding and keep the centre of the bush open. The bush should have mostly young shoots, pointing up- and outwards. Spur pruning is rather harder work, for which reason, you don’t very often see it. It requires tip pruning of all the main stems, and cutting back all the side shoots to a bud about 8cm from the base. Again, it’s best to prune to an outward-facing bud to keep the open shape. 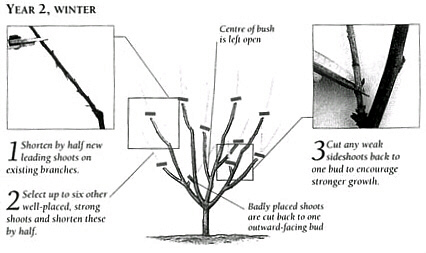 As well as pruning, this is also a good time of year to give your fruit bushes a top-up mulch or top-dressing. Adding organic matter gives them a good boost of nutrients to help them make bigger fruit, and mulching also helps keep in moisture if we have a dry spring like we did last year (good compost available from thecompostshop.co.uk). Home-made compost is good, as is topsoil, especially if your soil is a bit poor or not ideal for the type of fruit. You can buy topsoil and compost from topsoil suppliers if you don’t have any to hand. A good layer of compost or new top soil will ensure that your bushes have all the nutrients they need to grow high quality fruit for you, and give you a great yield.