Growing tomatoes is not especially hard, although they do have some fairly specific needs, and take a bit of looking after. You can grow tomatoes in containers, even hanging baskets, greenhouses, under cover in cold frames, or outdoors, provided that you choose the right variety. Not every variety will grow well under all conditions, so select carefully to fit your chosen site.

Tomatoes are reasonably happy in almost any type of top soil. If you’re growing tomatoes in a greenhouse and you know it’s been used for them in previous years, you might want to top up the soil. You can buy topsoil from topsoil suppliers, or use soil improver instead.

Tomatoes are available in different types, including trailing, bush and cordon or indeterminate.

Trailing tomatoes are often grown in hanging baskets, and including ‘Tumbling Tom’; these are often cherry tomatoes.

More usually seen are bush or cordon tomatoes. Cordon tomatoes will need stakes to grow up, and to be tied in, otherwise they will flop. Bush tomatoes will grow by themselves, and form a small bush, as the name suggests, and are most suitable for growing in containers. Most of the standard varieties are cordon.

As your cordon tomatoes grow, they will develop a single strong central stem, with leaves branching out on either side. Where the branches leave the stem, they will also grow sideshoots. You will need to pinch these out, to keep the growth focused where you want it. Once the plant has reached a reasonable height of about five feet, and started to set some fruit, pinch out the top shoot as well, to focus the plant’s energies on producing fruit. 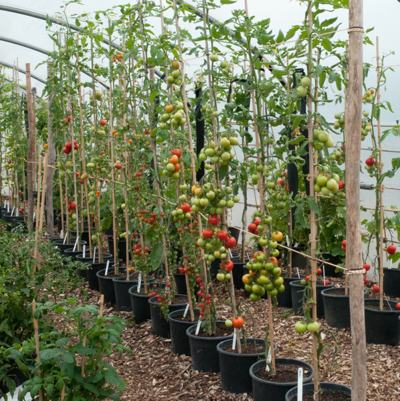 You will need to feed your tomatoes regularly if you want good yields. You will also need to keep the moisture level fairly constant, including in a greenhouse, as too little water can cause the fruit to split. Some kind of automatic watering system is ideal for this, as it will remember even if you don’t. Tomatoes like to be warm, so a greenhouse is ideal. But they don’t like to be too hot, so make sure that your greenhouse is well-ventilated and particularly that you can open the vents to keep it at a reasonably constant temperature even on hot days.

Tomato plants, especially in a greenhouse, can be susceptible to slugs and caterpillars. The best way to control them is to pick them off and remove them by hand, time-consuming though that may be. Tomatoes outside may also be subject to blight, and the only cure is to cover them before the blight arrives, or pick them quickly before they have time to rot.